Pop Central are a dynamic and versatile female fronted 4 piece band who’s heart pumping, high energy entertainment together with their repertoire of the biggest dance floor fillers from across the decades will guarantee to leave a lasting impression and raise the roof off of any party or event. Playing everything from massive club hits to everybody’s favourite singalong classics, the band comprises of talented musicians of the highest calibre with a wealth of experience including performing at Glastonbury, Edinburgh Festival, DW stadium, European tours and entertaining the likes of Noel Gallagher and Wayne Rooney. Their world class lead singer has performed globally with her striking, powerful, soulful sound and brings her infectious charisma and unfaltering passion to every party. 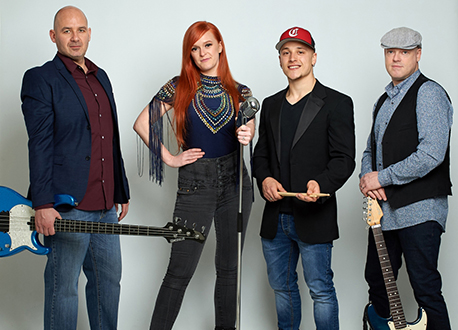 Pop Central are happy to perform first dance requests, examples of which include Rule The World (Take That), Let’s Stay Together (Al Green) and The Last Of The Ladies (The Courteeners), but can also learn any first dance requests that are not in their repertoire with prior notice.

There is an option to add Saxophone and/ or Trumpet to our lineup or go for a more streamlined 3 piece option.

They are a fully self-contained band, with an EV 2.5kW PA system and lighting rig. They can also provide PAT test certificates and Public Liability documents where required.

“Danielle and I wanted to pass on our thanks to you and the band for last Friday. You were all fantastic. So many of our guests commented on how impressed they were with your performance and it was great that you were so accommodating with our requests. We hope you enjoyed it and were happy with everything.
Hope to see you at another wedding in the future! All the best.”

“My husband and I just wanted to say a MASSIVE thank you to the band for playing at our wedding in July. The whole band was absolutely fantastic and was more than I could have wished for! We had a fantastic day and your band played a huge part in making our day so special! Thank you!”

Dave, Wedding at The Tithe Barn in Carlisle
Absolutely amazing! Music was so important to us for our wedding and we certainly made the right choice. From our guests dancing to their soundcheck to everyone shouting for “more” at the end of the 2nd set. They were versatile, had a wide repertoire and everyone commented on how fantastic they were. Thank you – if we ever need a band again we will be in touch!”

Lou and Jonny, Wedding, Cheshire
“If we could rate you higher than 5 stars we would! From the start the booking process was very easy with quick responses to all emails and requests. On the night itself you truly did bring the party and we had lots of comments on how good the band were. We had the most amazing day and you definitely were a big part of making it happen. Thanks so much.”

Phil, Wedding, Manchester
“We had the band play for our wedding and I can’t tell you how fantastic they were. From start to end they were so friendly and helpful which made such a difference as there were a few delays during the day meaning that things were running a bit late but the bad were fantastic, they just took it in their stride and worked around us. The music itself was perfect and they even learnt our first dance! Everybody commented about how good they were. What a fantastic end to a fantastic day and I would definitely recommend them to anyone. Thank you!”

David, Wedding, Liverpool
“The Band were the perfect choice as our wedding band. They were thoroughly accommodating when it came to our rather pedantic requests and the level of their communication before the event was spot on. Their set was expertly paced and their natural exuberance and energy ensured the dance floor was the most popular place to be throughout the evening. None of our guests wanted them to finish, demanded an encore, and have all since commented how much they enjoyed the band.”

Kate and Tony, Private Event, Merseyside
“You were awesome. Everyone commented on how brilliant you were, which was reflected by the number of folks up on the dance floor from the first to last song. From initial communication to the end of the evening you were all so professional. I would have no hesitation in recommending you to others!”

Anna, Wedding, Merseyside
“They were absolutely brilliant! The dance floor was full at all times when they were performing! We totally enjoyed it and had so many great comments from our guests on how much they loved the band! In addition they were very professional and so easy to deal with! No doubt we couldn’t wish for a better night! Thank you guys so much! You totally made our wedding day special!”

Chris, Military Event, Liverpool
“They had virtually the entire group on their feet and dancing through each and every set, and where one of the fundamental reasons why the night was such a huge success with much positive and NO negative feedback. I would have no hesitation in recommending them for any other function, and would say we WILL be using them again for future functions.” 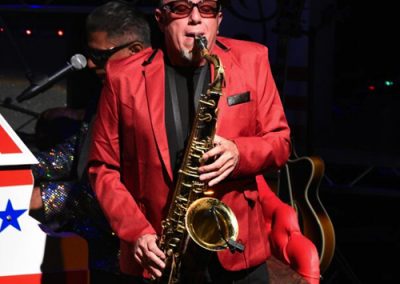