Simon Brown is a professional wedding pianist vocalist. A singing pianist for hire, he provides wedding music and wedding entertainment on his own trademark 6ft portable WHITE BABY GRAND PIANO. Besides providing piano and vocals at many weddings and civil partnerships, he also works as a singer and pianist for corporate events and private parties. His professionalism, sense of fun and huge repertoire – plus requests – are all guaranteed to make your event a success.

Simon is a hugely experienced wedding pianist and wedding singer. He is recommended by north-west venues as a pianist and singer for weddings or with his function band for corporate events. If there is no piano at the venue, he performs on his own trademark 6ft portable WHITE BABY GRAND PIANO (above). He can also supply a 5ft portable RED BABY GRAND PIANO or 3ft 4″ portable WHITE MINI GRAND PIANO. A WHITE UPRIGHT PIANO or piano keyboard are also available

Born in Birkenhead near Liverpool, England, Simon comes from a very musical family and began playing piano at the age of 4. Already by the age of 7, he was performing on the piano at primary school and soon composing his own songs about love in year 4…

For his 15th birthday, as there was no longer a piano at home, his Dad bought him a KD28 acoustic guitar from Hessey’s in Liverpool so he could learn guitar with his 2 cousins. He learned guitar and then bass and started writing more guitar-based original songs.

While sudying languages at university, he honed his craft busking with his trusty guitar around Europe including 6 months in Oviedo, Asturias, in the north of Spain, and then 6 months in Paris.

1987 – 1991: After graduating in 1987, he headed back to Oviedo and formed a band with Abel Martinez (guitar), Alex Coloma (keyboards) and boy wonder Chema Fombona on drums. With Simon on bass & vocals (and songwriter for the band along with Abel), Dona Kebab won the Battle of the Bands in 1990 and secured a record deal for their first album “Hola Chica” (see below)

Between 2002-04, he embarked on several 3 month tours in Sweden and Norway culminating in his performance February 2004 at the SAS Radisson Hotel, Lillehammer as piano entertainer for the official IOC 10th anniversary celebrations of the Winter Olympics. From there, it was on to Dubai and various private functions around the Dubai World Cup organised by Damian Calderbank and finally 2 weeks in Japan including a trip to the Budokan although this time just as a tourist. He returned to spend the summer in Majorca while still honouring private and corporate engagements in mainland Spain, Germany and UK.

Although the vast majority of his engagements are now weddings, corporate and private parties, he continues recording original songs, music for other artists and original compositions for a variety of media projects.

As a wedding pianist and singer, Simon provides wedding entertainment for 80-100 weddings and civil partnerships a year. He typically covers daytime arrival as guests are seated, ceremony, drinks reception and wedding breakfast. He can also provide evening entertainment either solo or with his band.

He plays and sings thousands of songs including current wedding favourites such as All Of Me, A Thousand Miles, Thinking Out Loud, 1000 Years, It Must Be Love, Say You Won’t Let Go, etc. He is also happy to perform your own favourite requests. He offers a huge repertoire and music for themed weddings with for example a Disney, Star Wars, Great Gatsby or Twilight themes.

Simon typically plays 15 mins of instrumental pieces as guests are seated. He then plays the processional for the bride e.g. A Thousand Years, How Long Will I Love You? After 2 or 3 pieces for the signing of the register, it’s time for the newlyweds to walk out to something upbeat like Signed Sealed Delivered!

He provides music for the drinks reception which lasts 1.5-2 hours. He takes requests from guests and plays a mix of background music on piano & vocals or just piano

He plays music throughout the wedding breakfast up to speeches, so again 1.5-2 hours. Songs are always played at the right volume usually building up to a bit of a singalong once the main course is out of the way, if not before…

“Simon, absolutely first class! Your performance at my daughter’s wedding in Windermere was truly amazing and you were a joy to deal with. We will be in touch…”
John Getty

“Your singing and playing were fantastic and everyone had a great night. Our Tom Waits first dance was perfect so we wanted to send you a special thank you.”
Kate & Michael Galvin

“Thank you so much Simon for performing at our civil ceremony and drinks reception. Everybody commented on how much fun they had with you plus you played all of the special requests we had given you. We will be recommending you!”
Karen & Jane

“Thank you for preparing the specific songs with the choir and for your own performance with your beautiful piano. You were the perfect choice for our event!”
Cadbury Trebor Bassett, on the PR wedding of Bertie & Betty 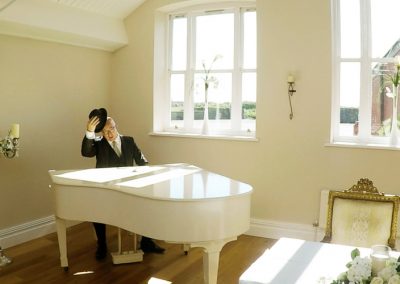 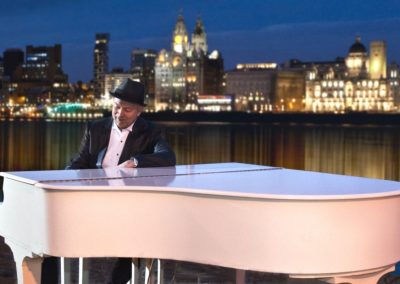 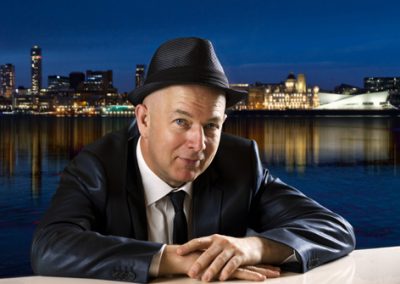 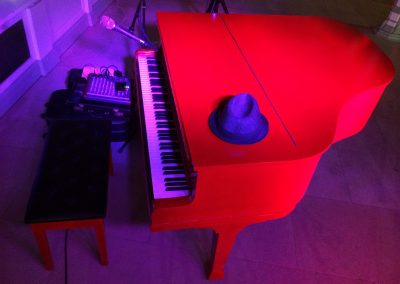