Six In A Bar

Playing and singing fantastic music out of the 1920s and 30s by such greats as Louis Armstrong, Jelly Roll Morton, Clarence Williams, Fats Waller, Fletcher Henderson, Duke Ellington to name but a few… 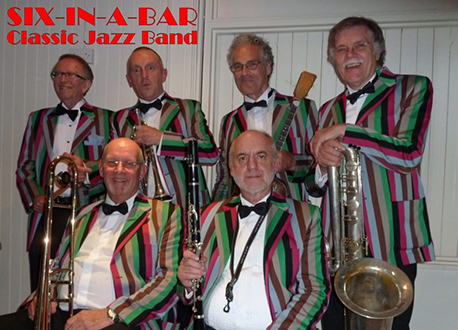 MIKE LOVELL…leader, trombone and vocals
Born in Brighton and moving to London at an early age, Mike started playing at the age of 12 in his school’s brass band. He then went on to play with the Essex Youth Orchestra. At 16 he formed his first jazz band, playing in many venues in and around London. After playing in dubious ‘joints’ in Soho and famous jazz clubs such as the 100 Club in Oxford Street and Ronnie Scotts, Mike joined a famous American jazz/rock band and toured Scandinavia, Europe and West Africa living and based in Brussels, Belgium. He then came out of the business for several years and went into the management of casinos, night clubs, and hotels.

WILLY ENTWISTLE…reeds, violin and flageolet
Willy started his musical career in 1966, playing cornet with the Vintage Syncopators, a comedy jazz band. He was there at the birth of Mick Burns’ Rhythm Kings. Taking up saxophone, Willy returned to the Vintage Syncopators in 1973, subsequently joining a comedy act, Laughing Stock. In the ‘80s he went into country music, which ultimately caused him some hearing problems. Returning to jazz in 1998, Willy joined the Temperance Seven and took up clarinet, having depped with them on alto saxophone for several years. Willy is a brilliant and versatile musician and great arranger.

PHIL LUCAS…trumpet, flugelhorn and vocals
As a music student Phil studied at the Liverpool Hope University on trumpet and attained his music degree, training in orchestral trumpet techniques and later becoming a brass specialist teacher for the Liverpool Music Support Service. Phil’s earliest experiences as a jazz musician were spent with the Wirrorleans Jazz Band playing in Ma Boyles Pub in Liverpool. He then started to dep. with other Dixieland bands. As a qualified music teacher Phil then moved down to Worcester for a couple of years and was soon sought after by a succession of quality musicians and bands, such as, Richard Leach, Martin Vassey, Perdido Street Jazz Band and many more, appearing in Jazz Festivals such as Keswick, Upton upon Severn and Pershore, which included four years with the American piano player Jeff Barnhart and his 18-30 Band at the Keswick Jazz Festival. Recently Phil moved back to the Liverpool area with his wife and baby Isabelle where he now teaches in a primary school in the Old Swan District of Liverpool. Phil recently joined SIX IN A BAR Classic Jazz Band and with him on trumpet, they are going from strength to strength.

COLIN TURNER…bass saxophone and double Bb tuba
Colin first played jazz on tuba with Wigan’s legendary Vintage Syncopators in 1967 and was a founder member of Mick Burns’ Rhythm Kings, now better known as the Harlem Hot Stompers. He left jazz in 1975 but returned to it in 1985 to join Bozo Butterworth’s Hot Potatoes, from which sprang the 1920s style quartet, the Harmony Hounds. Apart from the Hounds, Colin also plays with the Quayside Hot Stompers and Ged Hone, and has also appeared in bands featuring Keith Nichols, Bent Persson, Norman Field and Spats Langham. Colin started doubling on bass saxophone in 1988.

CHRIS HOWES…banjo, guitar and vocals
Chris, for many years, has been a key member of the Harmony Hounds playing banjo and guitar. He has great feel for the 20s and 30s and his singing voice lends itself beautifully to the period. For many years Chris was also a song writer at Warner Basart and certainly knows how to put lyrics across.

PETE EDDOWES…percussion, washboard and ‘things’
Peter has been playing jazz drums for many years working with the New Riverside Jazz Band for some 10 years and also playing alongside some great musicians such as, Cy Laurie, Neville Dickie, Roy Williams and John Barnes. Peter has also worked with comedian Jim Bowen as well as playing on cruise ships and in pantomime. 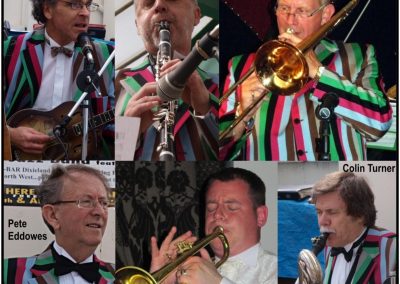 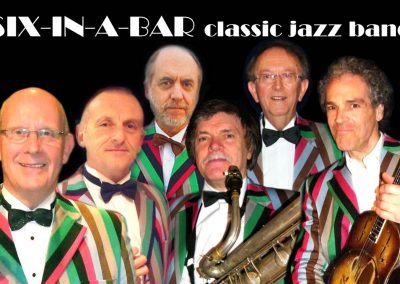 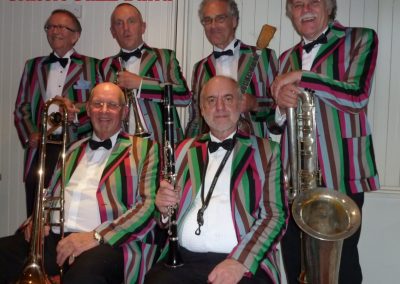 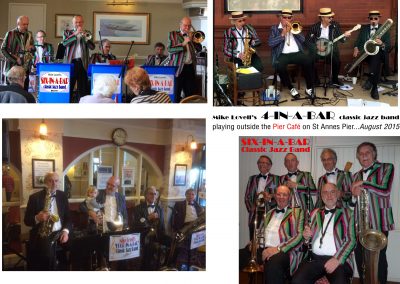 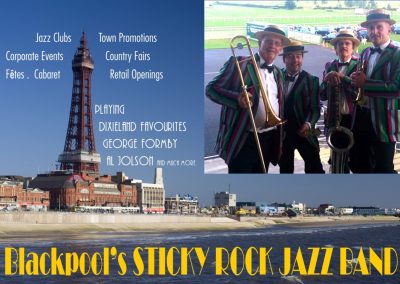