When you think of the 1960’s, you think of the golden era of music with so many hits.
For those fortunate to be there, the Swinging Sixties was a magical time for popular music, a truly golden age which spun hit after hit.

And one of the most memorable was The McCoys’ interpretation of Hang On Sloopy, which became a monster success, and is still hugely popular today.

And it was being there, loving that wonderful time and its songs, which led to four talented British musicians fostering their special memories, preserving them for live audiences to enjoy anew today, keeping alive the McCoys name, with Hang On Sloopy and Spencer Davis’s Keep on Running being just two examples of a superb repertoire from the Sixties. 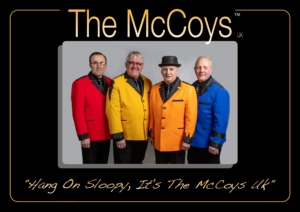 Meet the band.
The members of McCoys uk are artists who, as individuals, are highly talented and often called on to deputise at short notice with other bands.

Martyn McCoy
Martyn McCoy, who started playing in 1965, is a powerhouse drummer who frequently works as a session player for groups such as The Cufflinks, and Billy Fury Tribute. Previous bands include Hedgehoppers Anonymous, Why Not and, for the last 26 years, Martyn teamed full time with top midlands 60’s harmony band Krys.

In recent years Ian had toured as a solo performer for Air Tours and Thomson Holidays, and in a resident duo for Thomson Gold.

Dave Crane.
An acoustic and bass guitarist, as well as a lead and backing singer, who for several years entertained on cruise ships before touring Britain and Europe with the Bridgetown Concert Show Band. More recently Dave has been working with Phoenix and deputising with Lynnx.

Ed Doolin.
Ed is a gifted guitarist and vocalist with over fifty years in the business. He has played with Soul Machine, and toured internationally with the likes of Arthur Conley, Aretha Franklin, Ben E King, Jonny Johnson, The Wish Orchestra to name a few, and he also worked as A&R man for Rolyn Productions ATV.

More recently Ed has fronted Accelerate, Raffles and Phoenix on lead guitar and vocals, as well as depping for many other bands along the way.

Classic songs from the 60s